My newest blog post is up over at the Gamer's Codex for Geek Girls Gaming!

I talk to Misty Massey, Jaym Gates, Laura Haywood-Cory and Gail Martin about their experiences playing D&D and how it has impacted them!

40 Years of D&D through the eyes of authors

~Tera
Posted by Tera Fulbright at 9:32 AM No comments:

A Tribute to Aaron Allston

So I’d had this post all written for Friday about cons and role-playing and writing…and then Thursday night about 10:30am, I got a phone call.

Our Dear friend, Timothy Zahn, had called to tell us that friend and fellow SW author, Aaron Allston, had passed away. He was 53.

Facebook is filled with touching memories and tributes to Aaron. So many that it is truly awe-inspiring to see how many lives he affected as a game designer, a SW author, a mentor and a friend.
I first met Aaron at Stellarcon 1999. At SC24, he came back along with Tim Zahn and Mike Stackpole and for a number of years, the three of them returned to Stellarcon every other year while I was involved in the con and even some after I stepped away. (26, 28, 30, 32, 34, 36) Aaron was also at Scon 25. Poor Aaron though, he did miss one year due to food poisoning at the airport!!

I remember we held the first SW trivial pursuit game where fans teamed up with Aaron, Mike and Tim to answer trivia questions. I’m pretty sure Mike won but I also remember that Aaron was the one that made us laugh.

At Stellarcon 25, in 2002 the Carolina Garrison inducted all three authors as the Legion's first three Honorary Members. 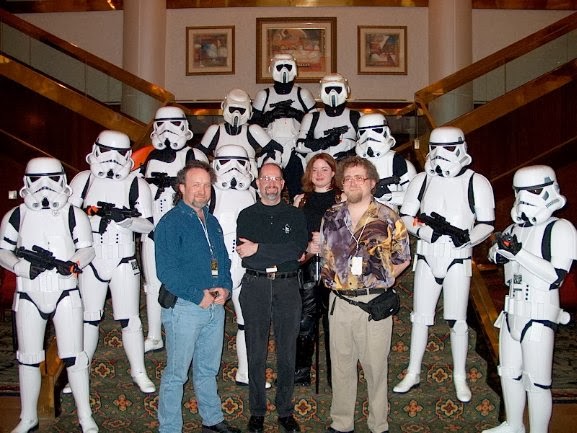 Aaron was at all times a gracious guest, impossibly patient with the foibles of a university-run convention and dedicated to his fans. He was so incredibly fan-friendly. It wasn’t hard to find Aaron in a crowd; he was the one sitting around making people laugh. Or groan with his beyond horrible puns. Well, that and wearing the loudest shirt possible. J

I loved Aaron’s SW stuff, but I liked his Doc Sidhe books best.  They still hold a place of honor on my shelf.  His writing always had this undercurrent of humor.  Much like Aaron, they refused to take life too seriously.

May the force be with you, Aaron.

"Suddenly you were gone/from all the lives you left your mark upon." ~ Afterimage, Rush

Posted by Tera Fulbright at 11:01 AM No comments: